This marks the 28th year of this venture! 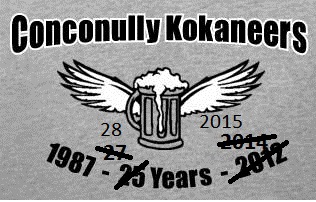 This year was a big change. After all the years at the Resort, first at the camp ground, and then the cabins, we changed to a different lake (the lower lake as opposed to the upper reservoir), and to a new resort, Liar's Cove. Gene, the owner of Liar's Cove, and his wife were most pleasant hosts. And of course Sherry works there, we've known her many years as she's worked at other places in town that we have frequented. I can't remember exactly, but it was probably in the art museum - or perhaps the Conconully opera (or maybe the Sit' N Bull). Kevin has been ejected from the old resort, but hasn't left yet. The locals tell us that the FBI are now involved (the resort is on federal land), and wouldn't be surprised if this ended up as a Waco-type shootout. That excitement didn't happen during our visit, though..

We were somewhat concerned about whether we would be too rowdy for the new spot, and knew we would miss the beauty of the reservoir. Most importantly, can we learn to fish a new place? However, the resort accommodated this group without complaint, and the lake was pretty - but in a slightly different way. We quickly figured out the fishing. The deepest part of the lake seemed to be the best, and the Kokanee liked their lures pretty deep with a slow troll. Of course dead fish were rising to the surface from far-away as a result of the strong odor from the corn/scent concoction that the Chief has been brewing for the last months. It reminded me of the mix that Crocodile Dundee made for attracting bats.

Thanks to Dave, Randy, Fritz and Zac for many of the following pictures.

No problem heading up highway 20 this year. Since there was little snow-pack, it opened particularly early. One of our stops along the way, in addition to Steelhead Park, Three-Fingered Jacks, and Loup Loup, is Ross dam. It's beautiful. 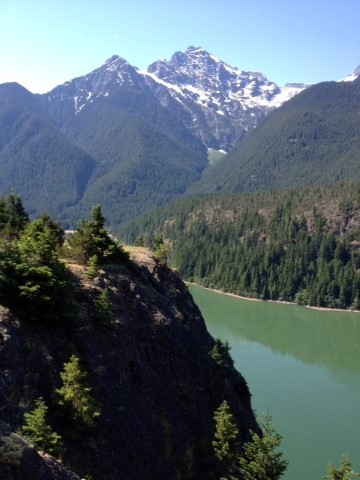 And then to Loup Loup. Dave, Chief and Mike claimed to be here the day before us, but I didn't see their litter, so I'm not sure. 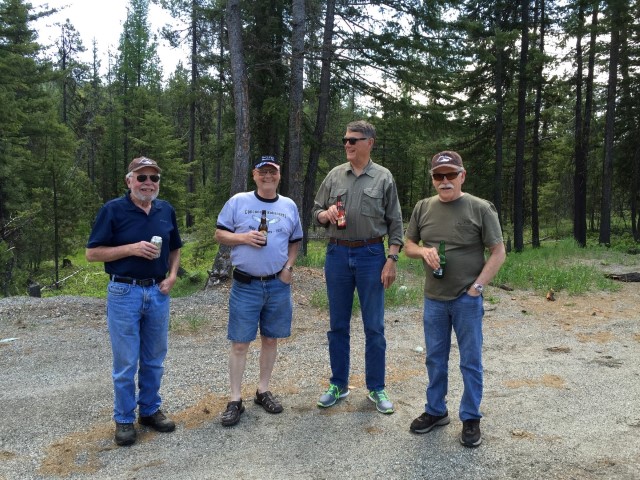 Eventually we make it to Conconully. Here's LeeRoy's boat in the water. We wonder whether it will run each year, although last years fuel-line fix made us hopeful that it was the main problem for several of the past years. This year, it was a little cranky the first time, but after a few hours came to life and stayed that way for the rest of the trip - although his trolling motor was a casualty. But then, so was Fritz'. Fortunately, most of our boats have at least two motors, so one motor can die and not stop all the action. 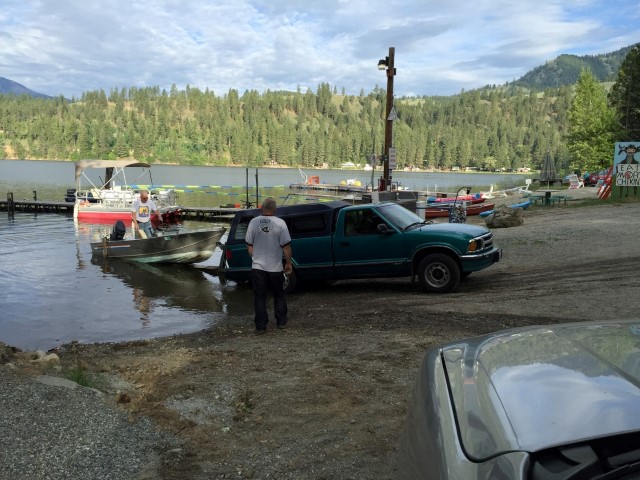 Soon we were all out fishing, and there were plenty of them, even though we were releasing those that we could. 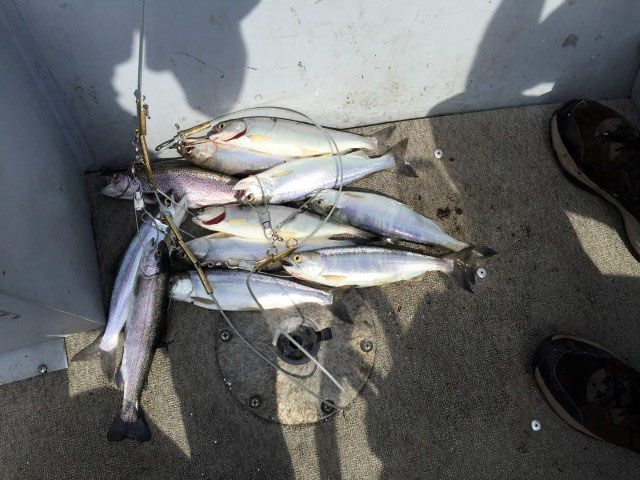 Speaking of releasing them, one of the boats discovered that if you forget to bring your stringer in and head back at high speed, it will leave most of the fish in the lake by the time it is discovered. But.....if you circle back, most of them will be floating on the surface, and can be re-netted. Not that this happened on my boat, of course.

On Friday, the "next-gen" guys rolled in. This was the first year for a long-time buddy of Ben's, Jon (center rear). And he fit in well. And Gordon (next picture, right), who is now Mark's son-in-law, decided to come again - I guess we don't seem as depraved as I thought he might find us. 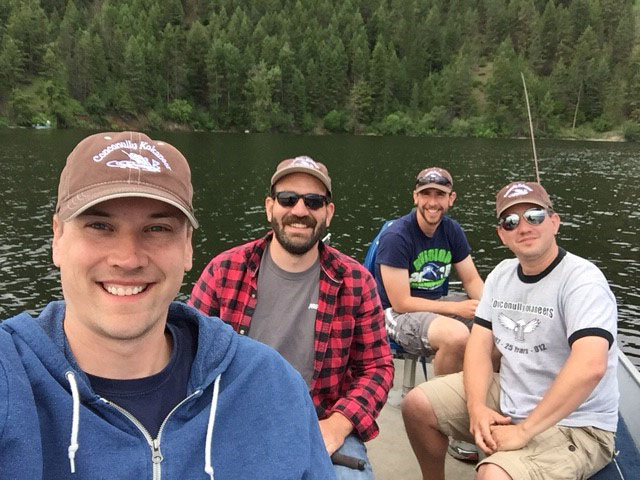 On Saturday, the young guys rented a party-barge from the resort. And they seem to be using to for it's intended purpose! I couldn't figure out why they were fishing away from the areas we had found to be the most productive, but it turns out that a different part of the lake has some cell-phone reception, hence allowing some good partying Pandora music. And, what's most important?

And partying got even more serious when time came to barge up in the afternoon for some BS, beer, margaritas, and a few Brenton tunes.

The porch of the Paul Bunyan cabin turned out to be the hanging out spot when not in the boats. Enough space and under cover from the elements. 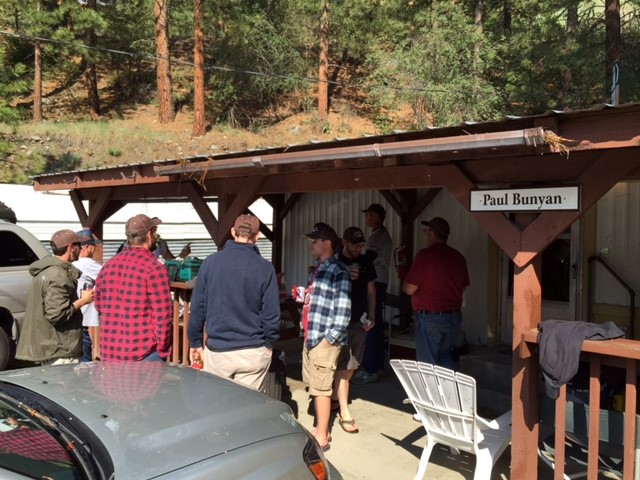 And it was nice to have the porch. I mentioned about the occasional afternoon down-pour. Well, here's Killer looking out at the rain. While heavy, the showers didn't last long. 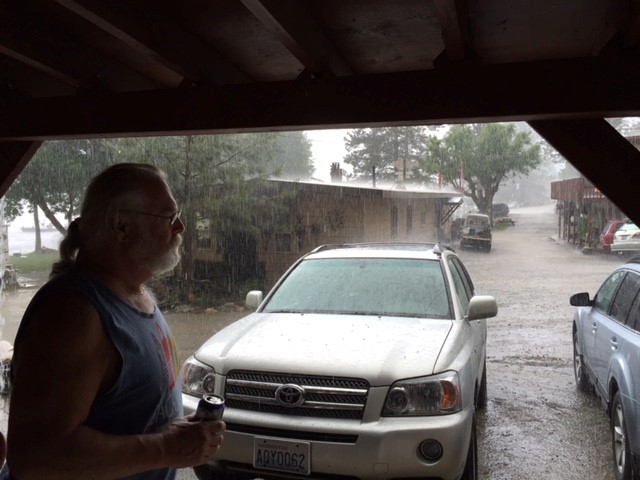 Random porch shots. These include those with our Friday night dinner, which consisted of brats, poppers, shrimp and chicken wings. It reminds me that if it's your turn to bring the brats, even though you may remember putting them in the cooler before you left, you could be mistaken. And one should check for such a discrepancy before its time to cook them, and folks are waiting. Glad they weren't out of them in town.

Fritz demonstrating that it's possible to cook and BS at the same time.

LeeRoy is momentarily distracted from giving the "boys" some wisdom.

In this shot, Brenton demonstrates how a school teacher can have a secret tool built into the sole of his shoes - a beer opener - never leave town without it!

Well deserved relaxation for those keeping the social security pots full for us old guys. Also not retired (but contributing!) are Zac and Dave.

Been a lot of enjoyable BS between these guys through the years.

LeeRoy just looks like an imp at times! Ready to give a hard time to anyone within earshot. Here, the Chief is counting on his fingers the times LeeRoy has given him crap recently.

Mark and Randy found things to talk about...

As usual, no one went dry. We had lots of things to sample. Beer, wine, margarita, apple pie, moon-shine, Fireball,... Last year on this trip, Mark bought an old pressure cooker at a store in Riverside - he's since converted it to a still, and brought the results. Here's sampling in process, which included Mark's whiskey and Fireball, and also some Apple Pie made from Everclear... 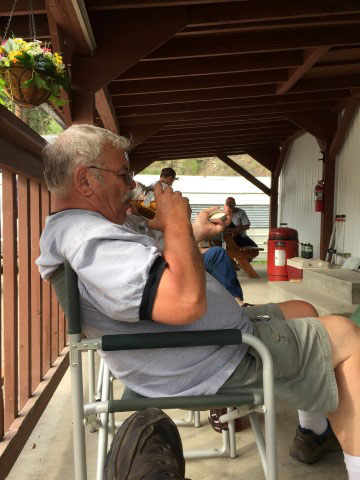 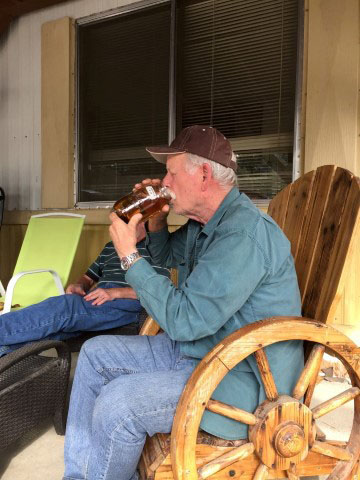 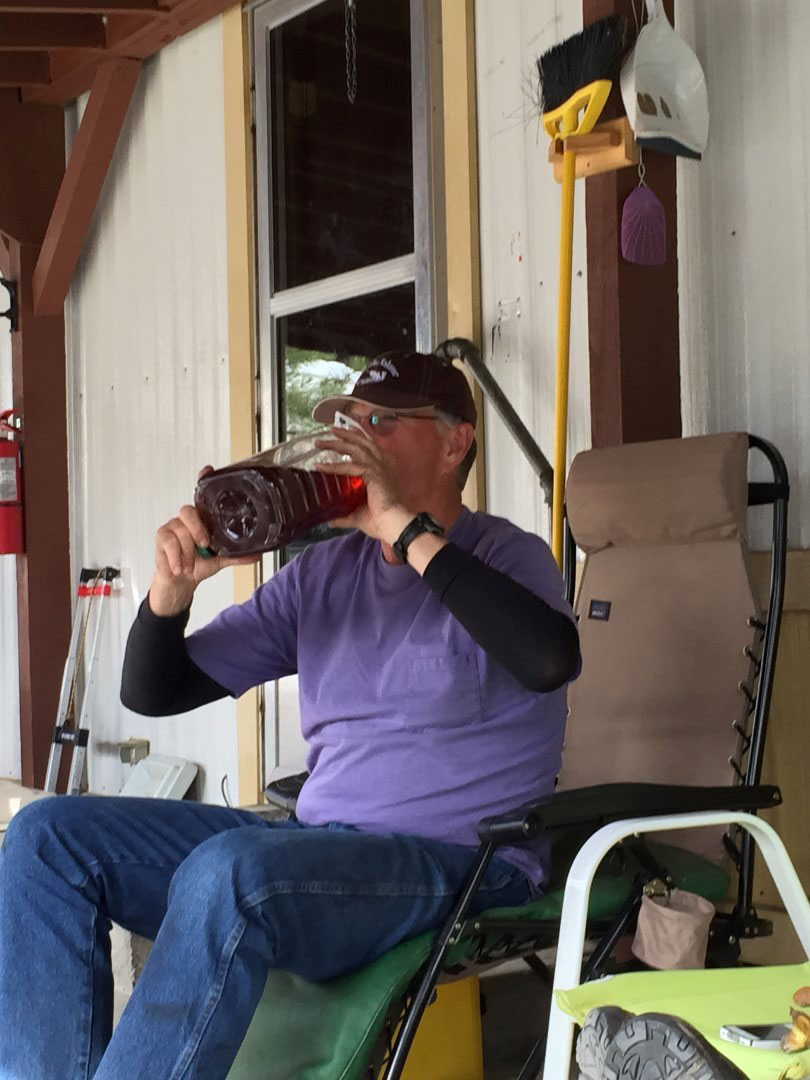 Not everyone agreed about how good things tasted... 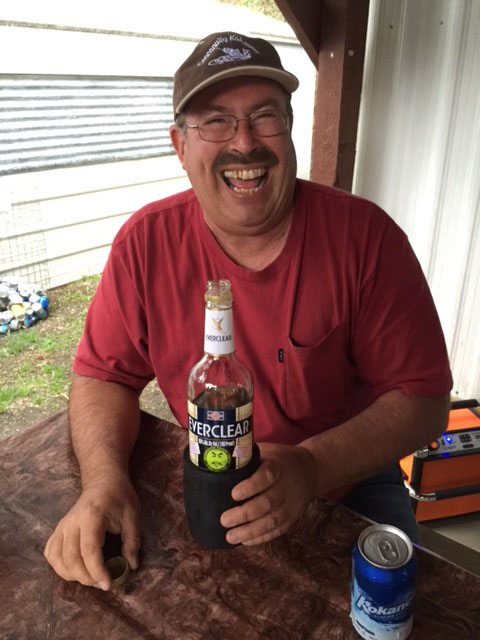 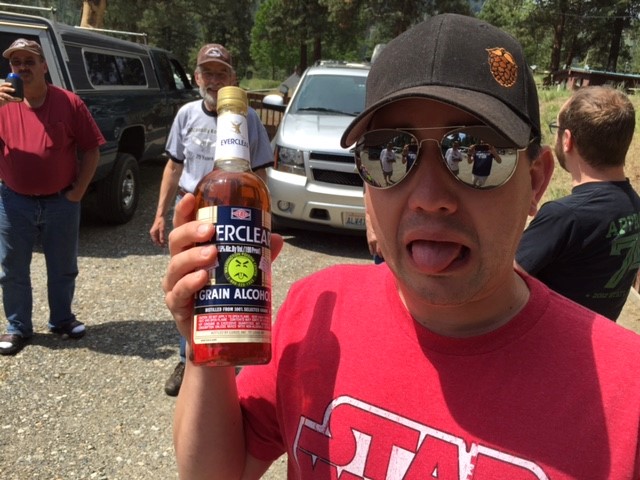 But there was little left unconsumed by the time we left. 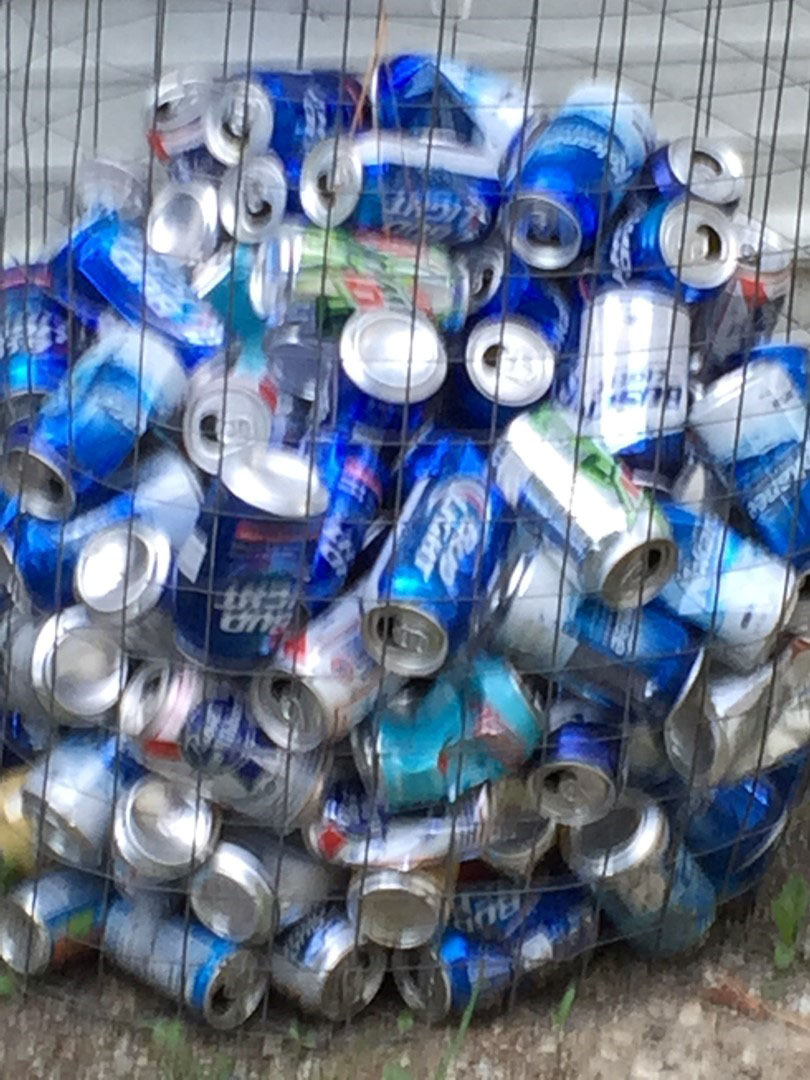 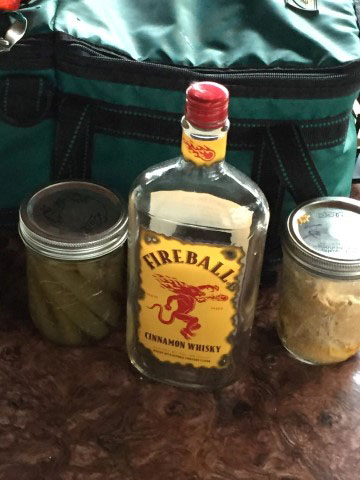 Not that one can't hope for more... 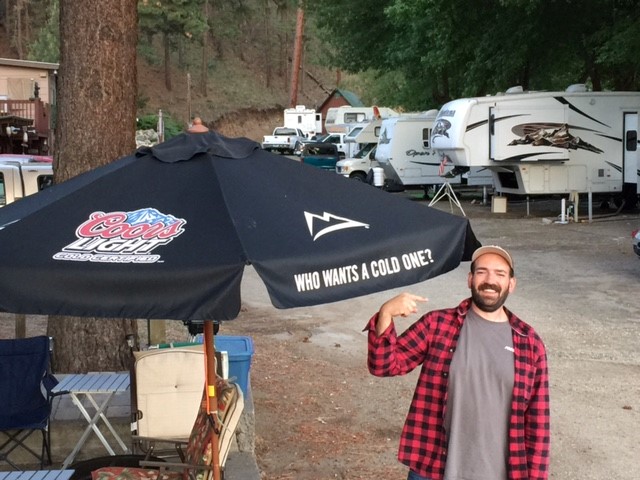 Brenton was good enough to bring his guitar along and provide some terrific music for the gang. 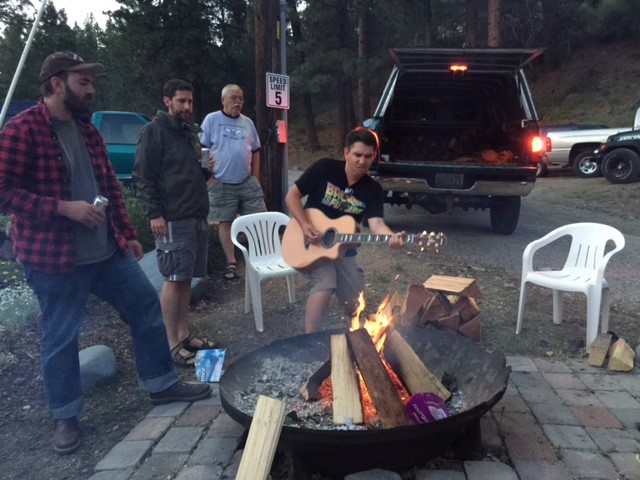 The RC "Fishing Machine" came along this year again. No fish landed, but had one on for a while. This resort has a great dock and cleaning station. 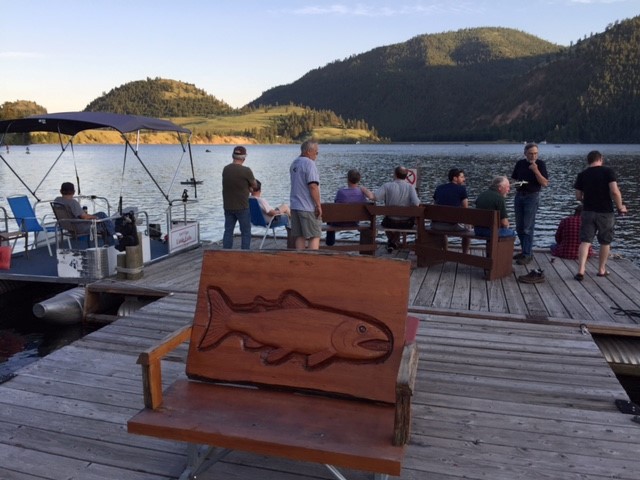 The fish this year were consistently in the 11-12" range, both for trout and Kokanee. However, a few came aboard that were larger. Here's the group waiting for the big fish award ceremony. 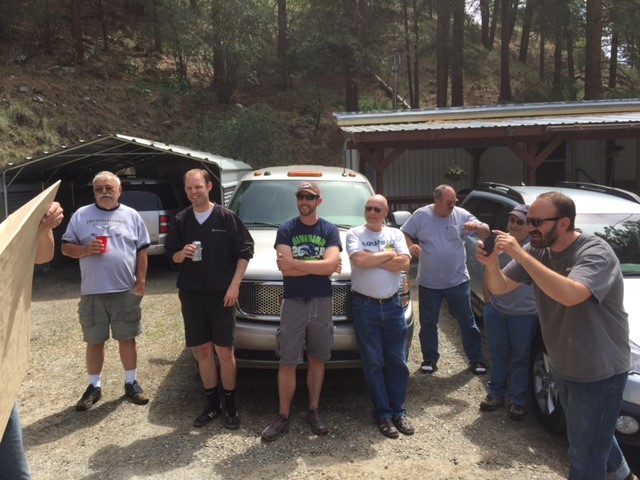 It was my year to win, with a 14 1/2" Kokanee. Zac, last year's winner, came up with a terrific graphic (and "Big Fish" hat) as this years prize. Here's the presentation... 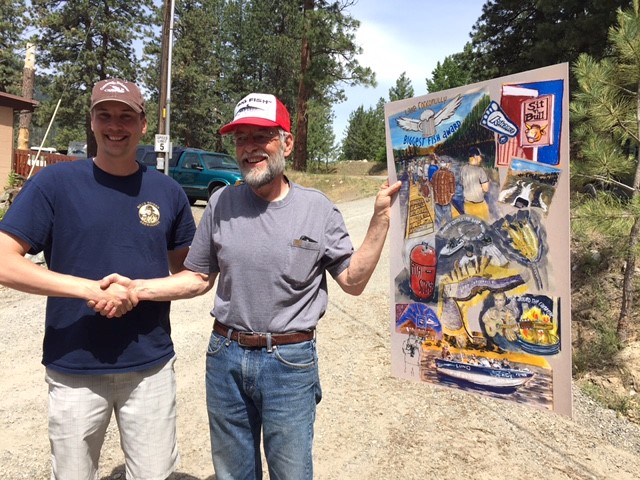 The graphic includes reference to many of our Conconully memories: the Sit'N Bull, trips to the cemetery for cell-phone service, Kokanee beer, the RC boat, fish, fish smoking, boats, Brenton on the guitar next to the camp fire, and even Critter's in there! Wonderful prize Zac, there couldn't be a prize I can come up with for next year that will match it! 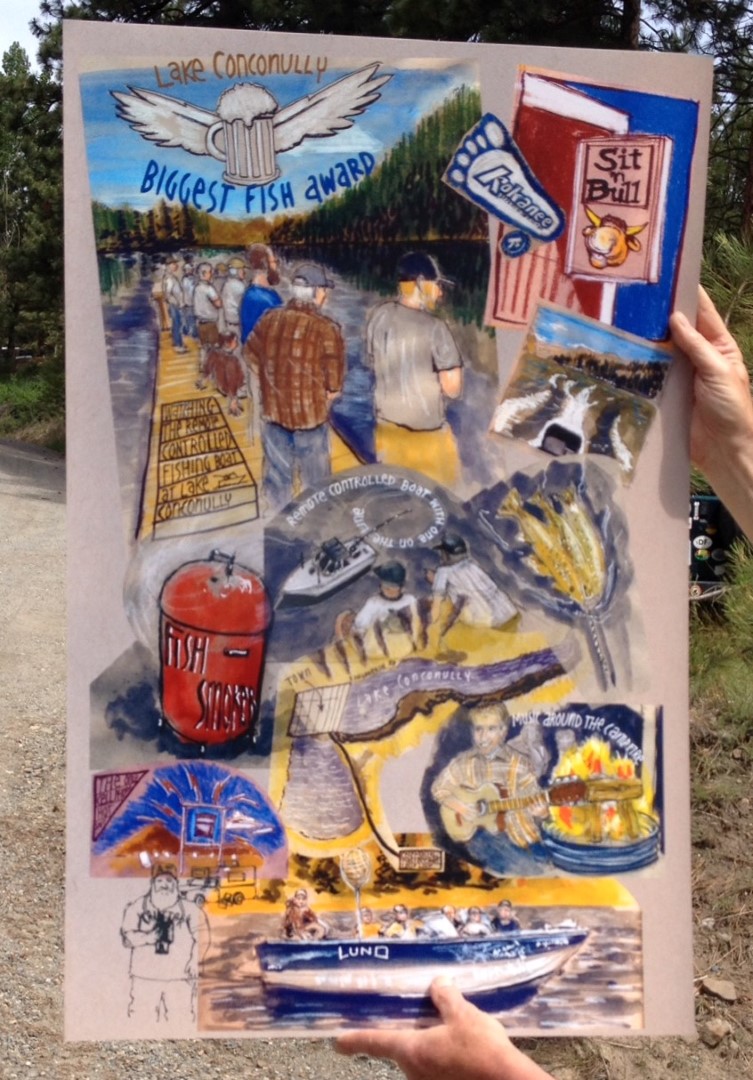 But, all good things need to come to an end, so we loaded up the boats after another good year. 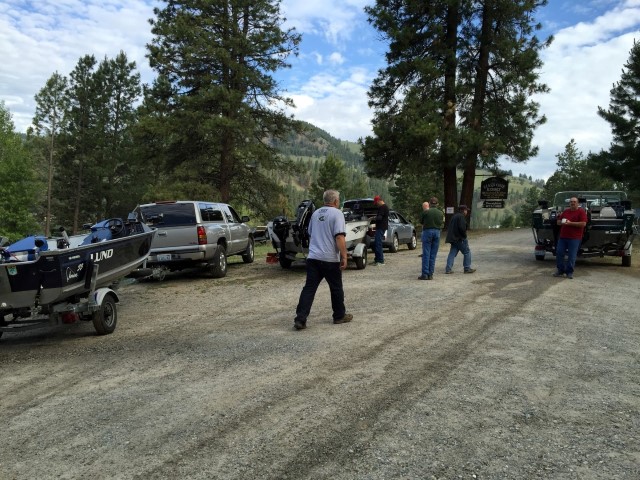 As we headed out on Monday, the annual cattle drive was going on, and we got into part of it. By the time we got home, our boats took some extra-hard scrubbing to remove the cow crap. Speaking of things on the road in this small burg, the previous morning I saw the "Bing" car in town, driving down the street and taking images. Who would think? 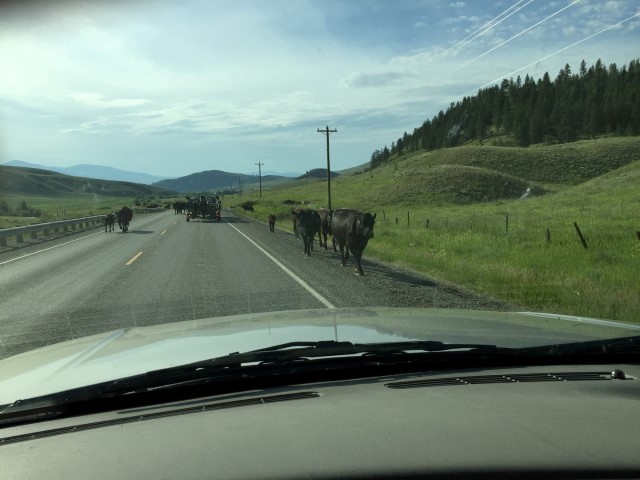 And on to Twisp, where Chief found a small helping of diet biscuits and gravy for breakfast. Hopefully it will tide him over until lunch. How did we live this long? 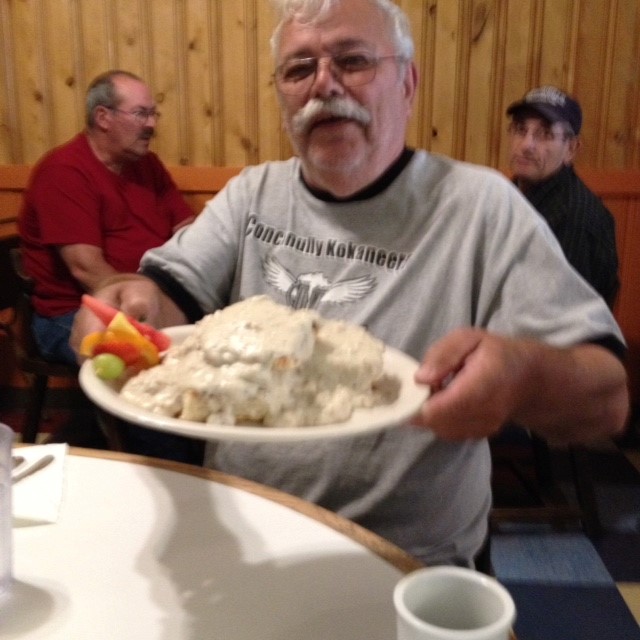 It was a wonderful Conconully year, as usual. Good eatin', good drinkin', good fishin', and a great group of guys!