This year marks the 27th year of this venture! 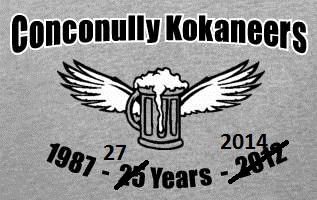 We had to take a detour up Hwy 9 this year, highway 530 was closed after the Oso slide. It was just about to open as we returned.

After the obligatory stop at Loup-Loup for the "ah, I'm almost there" beer, we arrived to find that Kevin (resort manager) was at his nicest. Stopping alcohol and losing 100 pounds has done him a lot of good. We got the news that he may or may not be here next year since the DNR is threatening to tear down his facilities and turn it into state park, extended the launch area which they already manage. Consequently, we investigated the facilities at Liars Cove, and made reservations there for next year. It's on the Lake rather than the Reservoir, so we will need to learn new fishin' territory. And hope for tolerant neighbors.

Thanks to Dave and Zac for helping add many of the following pictures.

Here's the Thursday group enjoying that first brew of the trip at Loup Loup...

First order of business when getting there is to unload and dock the boats. LeeRoy's boat was a little cantankerous again this year. However, after a trip to Okanogan for a new bulb for his fuel line, it ran great for the rest of the trip. Notice the "expert" advice he's getting, no wonder it got fixed This is likely the source of LeeRoy's boat woes for the last couple of years, so hopefully that will fix it for the future too. It was a hairline crack in the bulb, allowing air to be sucked in.

Speaking of fixing things, Kevin grabbed me one morning (unfortunately, Chief had told him that I knew a little about cars) and I spent a couple hours ripping apart the carb on his old 1978 F250. He had rebuilt it, and it wasn't running well at all. We found that he had forgotten to put a fiber washer behind the power valve, and that was it. After getting it back together, I thought it was still running bad, but headed off for a belated lunch anyway. While I was eating, Kevin took it for a drive, and said it ran better then ever. Must have been really bad before.

It was another year where our main eating place was the Sit'n Bull. One night (steak night) it was so crowded that we went to the Tamarack, where over-crowding isn't ever a problem. The food was good though. We miss "Double-D's" as the best eating place in town. Here are most of the "old guys" gathering for breakfast.

But, we're here for fishing. How did that go? It was hot this year, with the typical 12" Rainbow available about any time of the day. While Dave was kind enough to smoke a bunch of them, we returned most to the lake. 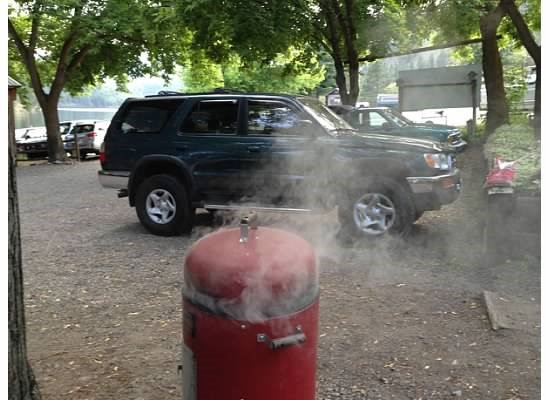 Everybody got to bring home as many as they wanted. Here's some of them preparing to be cleaned.

Here's Zac with his beautiful Kokanee. In the background is Gordon on his first Conconully trip. He'll be Mark's new son-in-law in a couple of months. That is, if he didn't get scared away after experiencing this adventure. We think we're somewhat normal, but no telling what the rest of the world thinks. We probably shouldn't hold our breath's while waiting to be given an award for being politically correct.

Here's Mark fishing hard, with Dave's boat in the background. Dave looked like a commercial troller with his long down-riggers on the side, and more lines going out the back.

The "kid's" showed up on Friday afternoon. Dave had mentioned in an e-mail that we might not have firewood since his supply is about gone. As a result, a number of other people brought firewood, and we even left some there. Here, Randy and the Chief are helping unload Ben's rig. Or at least thinking about it. Maybe giving advice is going to be it.. 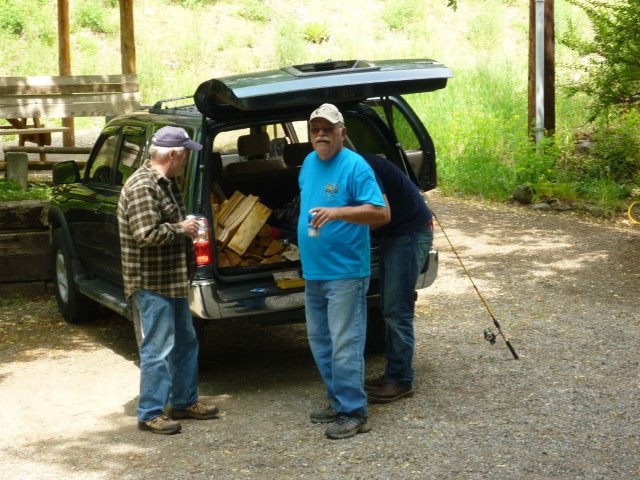 While we were there, the cattle drive was going on. It was sort of a somber year for the cowboys though, one of the older members, Gene, had a heart attack and died. Everyone in town thought that this was the way he wanted to go, in the saddle and driving cattle until the end. Here they are going by the cabins. The deer didn't have a lot of fear of us or the cattle.

We had brought along a few tubs of Margarita's to sip down. However sipping isn't in the Conconully vernacular, and most of it disappeared in one afternoon. Someone (not to be mentioned by name) was seen drinking just water the next day. A rarity for him. Randy also brought two bottles of home-made apple pie (he even made the moon-shine in it), which disappeared quickly around the camp fire one night. In spite of this, the "boys" seemed cheery and up early the next day, ready to fish.

Here are a few shots of the fishermen rafted together out on the lake enjoying Margaritas and brewskis. I won't say which one decided that it is possible to have too many Margaritas, when reviewing the situation the next day.

Fortunately for the young guys, LeeRoy is nearby for advice.

We had plenty to eat. Friday night Cabin 2 hosted a dinner. Mark brought Jalapeño poppers and bacon-wrapped shrimp that he made. Randy brought four dozen oysters along with the fixings, and I brought Brats. Nobody went to bed hungry (or thirsty) as these items were served from a BBQ that Fritz brought.

Even between meals, we found things to snack on, as seen in the picture of Randy....

I brought my RC "fishing machine" again this year. It drew quite the crowd at the dock. At the far end, there are some guys we didn't know, but wanted to see what this was all about.. 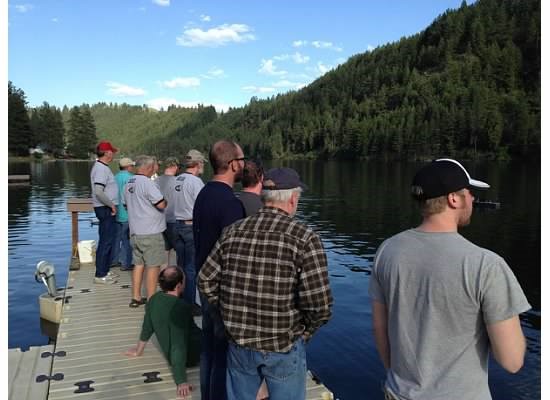 And, it caught a nice trout after a few minutes. This is just a standard 12" trout, but it can sure pull the boat around. I'm glad that the boat is pretty long (a little over four feet).. 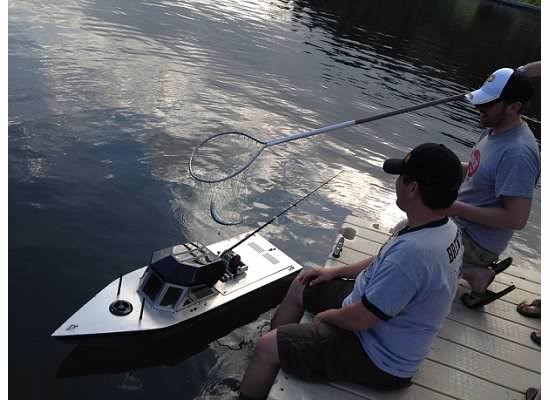 Some of us took a "road trip" one day to see some old tractors, and visit Riverside. Mark found a vintage, 2-1/2 gallon pressure cooker. Since we have returned, it's been polished up and converted to a still. Mark is always doing projects that you would least suspect.

By the end of the trip, the winning fish prize was won by Zac with his 16 1/2" Kokanee weighing one pound six ounces. Runners up were Dave (15 1/4 inches, one pound seven ounces), LeeRoy (16 inches, one pound 6 ounces), and Peter (15 1/8", one pound 5 ounces). We had two prizes this year. We all pitched in five bucks for the heaviest fish pool, and we also had the traditional longest fish prize. Zac took it all. Here's the award ceremony Sunday morning where Dave (last year's winner) presented Zac with an iron-man kid's fishing pole. It even lights up! now Zac will have some macho gear for next years trip.

It was a wonderful Conconully year, as usual. Good eatin', good drinkin', good fishin', and a great group of guys!