This was a special year since Critter rejoined us after a several year dry spell. Great to have you back Bob! This year makes it the 26th year of this venture. Hopefully there will be many more.. 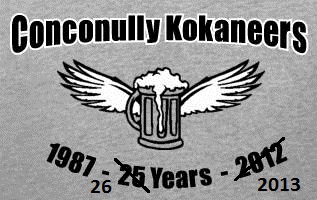 After the ever beautiful drive over highway 20, we arrived to find that Kevin (resort manager) was much improved. He's been off alcohol for a year now, lost 70 lbs, and was in good spirits most of the time. A welcome change! Not that this has turned into any repairs or updates to the cabins. Maybe next year, but they work fine anyway. Grant wasn't able to make it this year - his twisted priorities led him to believe that being best man at a wedding was more important than Conconully. I hope he can get his head on straight again..

Thanks to Dave, Zac and Critter for helping add many of the following pictures.

When Fritz, Mark, LeeRoy and I arrived, Chief was right there with help and advice...

In the background you see Fritz' shiny new Subaru Outback which did a great job of towing his boat over the mountains while getting good gas mileage.

LeeRoy's boat was a little cantankerous again this year. You can see that Mark's ears are red from the "sweet nothings" that LeeRoy is telling his motor. "It ran fine at home" LeeRoy claims.

Critter and Mike teamed up for some fishing in Critter's nice Gregor.

Here's Critter, Chief and Dave fishing. I think the Chief is giving himself a dope-slap about the fish he just lost, or the beer he just spilled. Dave added a big electric salt-water front trolling motor to his boat this year. It even has a GPS built-in so that it can "learn" a trolling path, and replicate it. Leaving Dave's hands free for beer and Margaritas.

But when not fishing, we have some of our best times out on the deck, telling stories and giving advice to each other. Too bad we can't help the younger generation with all our accumulated wisdom. For some reason, they aren't interested. This must be morning since the Bloody Mary cups are out. If it was afternoon, the Margarita would likely be out..

The "kids" showed up on Friday. Of course the "kids" are all in their 30's now. Fritz took Peter out so he could lend some useful advice.

Brenton and Ben seem to be enjoying things.

Zac was disappointed when he got skunked the first afternoon out, but he made up for it the next day.

The deer around the cabins have little fear of people.

Zac shot this of the rest of the Gen-II group. Brenton was able to catch fish in spite of his Duck hat. Imagine how many fish he could catch with a Beaver hat!.

Brenton brought his guitar this year, and we enjoyed some really fine guitar music around the campfire. He teaches a class in guitar playing, and I can see why.

For the men reading this: More and more voices were added to the singing as the evenings progressed. Pour a few Margaritas down Brenton, and you'll hear a great rendition of Stairway to Heaven.

For the women reading this: After a long day of pining for our wives/significant-others, we had hot cocoa and S'mores and sang "Row, Row, Row Your Boat" in six-part harmony.

The last few years, Dave has kept busy smoking our catches constantly putting fish into brine and then to the smoker and finally back the refrigerators. The result is amazingly good. Thank you Dave, we all appreciate your efforts! The Kokanee were particularly good, that's a nice fat one in the top rack, surrounded by some nice Rainbows.

This year, Mark and I brought along some RC boats which we had worked on over the winter. Mark made his 32" boat from scratch. It's a Monk design, that he scaled down and hand fabricated from the lofting plan of the original full sized boat. It's a beauty! You can see the fishing pole as he trolls along here.

My boat is 49" long which I built from a bare hull I purchased, then added a powered reel, depth sounder, line counter, horn, dual motors, bilge pump and line cutter.

I lucked out and caught three Rainbows with it (10"-12" range). Here's one being netted. It worked well to motor out a little bit, then lower the line (with worm) to within about three feet of the bottom, and drift with the wind. Probably got all three fish in about half an hour of fishing.

Here's one of the fish it caught.

The guys on the dock enjoyed watching the RC fishing..

Here are both of the boats "at work." A fish was on mine at the time if you look at the arc of the pole and the trail behind. Mark's is out there looking wonderfully arty and elegant. They almost look like full-sized boats in this shot.

A family of geese swam by the shore one day.

Mark, Fritz, Mike and I went on a road trip to find some old tractors we discovered a couple years ago. The owner, Tom Jones, is a wonderful 85-year old guy. Told us great stories about the tractors and other things. Even though some of the tractors dated back to the turn of the century, his dad had bought some of them new. This is up by Fish Lake, on the road to Riverside. The tool behind him is for installing new steel bands around wooden-spoked wheels of yore.

Some of them are Kerosene, and other wood-fired steam engines. They were all running as late as 1998, but then he stopped firing them up with worries that they might explode and someone get hurt. Years back, he invited a few neighbors over for an informal showing of his tractors, then word got out, and the next year several thousand people from all over came to the next show.

We ate a lot of our meals down at the Sit'N'Bull, here we are, all spread out at the bar. We were a little disappointed that they didn't come through with a keg of Kokanee for us this year, and the Chief is still waiting for them to get a Navy sign to join the existing signs for the other services. But that didn't dampen our fun. Fritz ordered a tall stack of plate-sized pancakes one morning, then announced he was totally stuffed. Then we went back to the camp and he immediately started on the munchies. It's like he has a nuclear engine inside to burn calories. Kinda like Zac. Fortunately all the food that they serve at the Sit'N'Bull is health-oriented. Some folks don't think of the Sit'N'Bull as being exotic, but they probably haven't heard of "Mystery Mercedes", one of the evening bar-maids this year..

Sunday morning came time for the big fish award. Peter was last year's winner, so he fabricated this year's prize. There was wood-burning involved, some flattened beer-can cladding, Kokanee cap corners, and some dangling wedding rings on the bottom.

Dave won this year with 15 3/4" Kokanee weighing one pound, four ounces. He caught it on pop-gear plus flasher and Gulp worm weighted down with "27 pounds" of weight. He caught it on the NE shore, just before the bend. Not that this will be of help next year. Chief was in the lead with just hours to go, but Dave's fish was 1/4" longer.

Fritz was the big-fish contest official measurer this year, and he brought some huge calipers for the job, along with a scale. Good job Fritz! Zac is testing the size of the fish on the trophy with the calipers.

Sunday night, Critter and Chief contributed a great dinner of BBQ jumbo-shrimp and sausage. It was first rate. Kevin even contributed a nice package of summer-sausage.

Monday morning, a cattle-drive came down the road. There were about 100-head of cattle, along with six or eight cowboys and cowgirls on horses, and a couple of herding dogs. They had driven them about seven or eight miles. When we drove out, we could track them for miles from the manure piles.

Sadly, time came to pull out the boats and head home from this great spot..

Brenton is showing us what life is all about here at Conconully.

And he's right, but the real reason is to enjoy the fine company of this great group of guys. This was a good Conconully year, I don't know how it could be better, but I've already had a request for another shop-meeting to start planning for next year. Never too soon!